How To Create A Video Blog 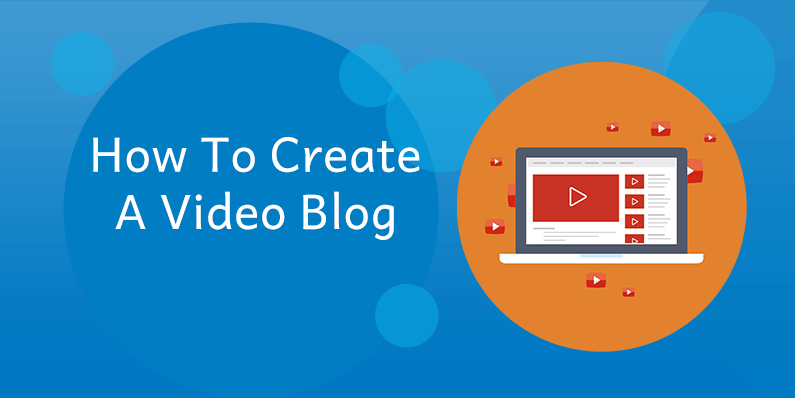 In our previous blog post, we discussed how easy and convenient it can be to embed third-party videos in your blog and social media feeds. However, by creating your own video blogs, or “vlogs”, you can produce the content you want to produce, control every aspect of the presentation, and you may even have fun in the process!

Creating Video blogs For Your Blog

Creating video blogs, either as a series of standalone productions or as part of an established blog, is becoming more and more popular with bloggers and personalities on websites such as YouTube and Vimeo. Video blogs are blog entries in video form, read aloud by the blogger on camera and may include music, effects or graphics. Creating video blogs doesn’t have to be a difficult or expensive process, but having experience with filming and editing video does help. Some amateur video bloggers simply record themselves sitting in front of a laptop or computer webcam or smartphone camera, and some choose not to follow a specific script – this may be acceptable for personal video blogs or popular Internet personalities, but if you are representing yourself as a professional or a small business, it is important to film and produce your video blogs as professionally as possible within a reasonable budget.

To begin, consider writing a script beforehand and memorizing as much of it as possible before you begin filming. As we previously mentioned, improvised video blogging is acceptable in certain situations, but a professional video blog should be more formal and structured. Feel free to improvise at points when you feel inspired, but for the most part clearly know ahead of time what you want to say, keeping on-camera reading to a minimum. Remember to smile and be as friendly and personable as possible – a deadpan or muted delivery can ruin even the most personable and engaging scripts.

Video blogging does not require an expensive camera or other professional equipment such as stage lights and a formal backdrop, but modest investments in certain pieces of equipment can help improve the quality of your video blog’s production immensely. Most smartphones and computer webcams, even inexpensive ones, now have the capability to shoot high-definition video, but it is difficult to steadily hold a small camera if it isn’t attached to a fixed object, such as a laptop or tripod. Small smartphone and webcam tripods are available online and in retail stores and are usually under twenty dollars.

Make Sure You Have Enough Memory

Laptops often have hard drive space to spare, but if you are using a smartphone for filming it is important to ensure that you have enough free memory on the phone to film several takes of your video blog in high definition. Some smartphones, such as many Android and Windows Phone models, allow you to upgrade the available memory on your phone through memory cards, but Apple iPhones cannot be upgraded in this manner. It may also be necessary to invest in video editing software in order to edit your video or add effects and music. If you are using a video camera, it is not necessary to purchase professional video editing software, which can be exorbitantly expensive – instead, video editing software designed for consumer use should be adequate.

The backdrop of your video blog should be a neutral or professional setting – a blank wall can work if you are operating on a limited budget, and filming outside in front of your office is a popular among video bloggers as well. If you are representing a company or business, filming in front of a large logo or signage related to your business is an excellent option. If you are planning on filming outside, be sure that there is enough natural light and that environmental factors, such as wind or precipitation, don’t ruin your shoot. Wherever you choose to film, make sure your microphone is adequately recording your voice and that external noise isn’t ruining your production.

How-to videos are another type of video blog which has become immensely popular with viewers on YouTube and other sites. Similar to a regular how-to blog post, a how-to video blog instructs the viewer how to successfully perform a process or task. How-to video blogs are more complicated to film and produce than regular video blogs, since the viewer will expect to be shown the steps involved in completing the process.

There are two types of how-to videos currently popular online – software tutorials that involve following the host completing a task on a computer or mobile device, and tutorials that involve interacting with physical objects. Filming the former will require screen capture software, which is relatively inexpensive. However, filming the latter can require more advanced filming equipment to properly convey all the required steps. For either type of how-to video, ensure that your script is completely accurate and free of errors before filming, and when preparing a script for a software-related process, make sure that any research you conducted beforehand matches the version of software you will be using when filming.

No matter if you are filming a standard video blog or a how-to video, it is important to respect the time of any other participants you include when filming. If you are paying your employees to participate in or record your video blogs, or if you are including a client or other guest at your office or at an outside event, make sure that you are prepared and ready to quickly record the footage you need in one or two takes – if you choose not to invest in an advanced camera or other equipment, it is important that you aren’t losing valuable footage and wasting everyone’s time with substandard recordings.