The Pitfalls Of Social Media Shortcuts 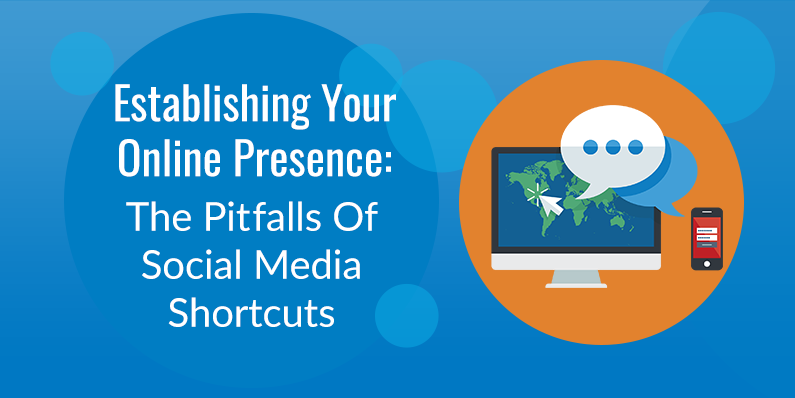 It may be difficult to believe, but just ten years ago both Facebook and LinkedIn were still in their infancy, and Twitter had just been founded. Of course, very few people grasped the potential of these services in 2006, but if you were one of them, congratulations, you’re probably very, very rich! Ten years later, it’s now very difficult to find entrepreneurs and other professionals who aren’t active users of at least one of these services, and even the smallest businesses grasp the importance of establishing presences on popular social media networks.

Expand Your Sphere of Influence

A social media presence is extremely valuable for a number of reasons, including connecting with built-in audiences that can number in the hundreds of millions. An invaluable plus is that you can learn about potential customers and understand more about your own business through comments, reviews, and feedback from your customers. Lastly, and some would say most importantly, social media networks provide businesses and professionals an opportunity to expand their popularity and sphere of influence. It does this by attracting new customers, boosting revenues, and developing an audience for future content marketing initiatives.

Boosting Your Number Of Followers

Social media even provides a few lucky individuals and companies a platform to achieve overnight success through successful viral marketing campaigns. Social media networks provide simple and convenient analytical tools that measure the success of a particular post or campaign, and the ultimate indicator of social media popularity and success is follower count. It’s easy to understand why boosting your follower count is a vital and necessary component of social media success. Too many individuals and companies are occasionally tempted to take shortcuts, both legitimate and illegitimate, to try to boost their follower count.

Illegitimate Shortcuts Simply Aren’t Worth It

When it seems like the success of your business can hinge on the success of your digital marketing initiatives, it’s very tempting to consider an illegitimate shortcut to boosting your social media followers. The primary method that most businesses pursue in doing so is buying large blocks of followers. If a third-party individual or company can promise you 100,000 new followers in a month or week, chances are they don’t have a magic formula for doing so legitimately. Instead, they likely have some sort of method in place of assigning bot accounts, or fake accounts operated by a computer, to your follower list. While you may achieve your goal in the short-term, your actual engagement with a real audience remains stunted, and your reputation may even be harmed as third-party services and tools exist that can sniff out the number of bot accounts among your followers.

Even Legitimate Shortcuts Can Backfire

Although there are many ways to legitimately boost your social media followers, not all of them are ideal or even effective. Pursuing an ill-advised method, even if it’s legitimate, can result in wasted time and money and can sometimes even damage your existing reputation. Legitimate shortcuts can include pouring a lot of money into social media advertising, conducting expensive and hastily-prepared contests, and creating “stunt” or irrelevant social media campaigns. There is nothing wrong with pursuing these methods of boosting social media followers, but only once you’ve invested the time, research, and foresight to ensure that you are pursuing them correctly can you be assured that they’ll be effective in the long run. For instance, social media advertising is an excellent method for attracting followers, but blanketing social media users by the thousands can be an expensive and scattershot endeavor. By properly researching your target market, you can spend less on ads that are ultimately more effective.

In our next blog post, we will explore powerful and cost-effective methods for legitimately and organically growing your social media followers.