Establish Yourself As an Expert in Online Groups and Communities 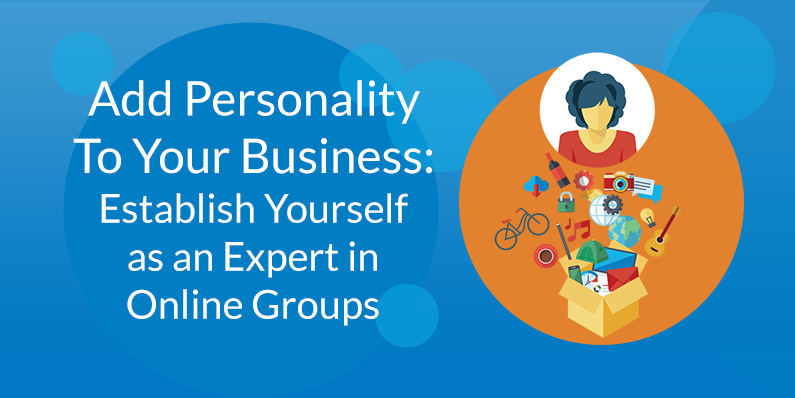 Now that you’ve begun establishing yourself as an expert through your blog and social media channels such as Facebook and Twitter, it’s time to consider building a reputation in other communities online, specifically Facebook Groups, LinkedIn Groups and one of the countless message boards where people meet to answer questions, seek assistance and socialize online.

Understand The Differences In Online Communities

There are advantages and disadvantages to engaging with online communities as a professional and/or representative of your small business or organization. It is easier to join public communities, answer specific questions and begin interacting and building relationships with other users almost immediately, while building an audience around your blog or social media accounts can take significantly more time and effort. However, it is very important to note that each group and online community doesn’t revolve around you in the same manner as a blog or social media account, and each community or group has a somewhat different “culture,” or set of rules and codes of conduct that are often unwritten. Jumping into a discussion within a community without first familiarizing yourself with this culture can have immediate and negative consequences.

Online Communities Have Existed For Decades

Decades ago, before the Internet became mainstream, online communities existed around BBSes, or online Bulletin Board Systems, and a worldwide messaging system known as Usenet, which still exists to this day! As the very first online community members were scientists, academics and researchers, online discussion was almost uniformly professional and civil. However, as more and more users began joining the online world, disagreements and disruptive behavior became more common, and administrators and prominent users began developing rules and codes of conduct that users were expected to follow in order to encourage a collective decorum.

Over the years the rules and codes of conduct were adapted, altered and eventually evolved to suit millions of online communities in various forms. Some of these rules are obvious and universal, such as disallowing spam messages and discouraging personal attacks, but in many communities there are unwritten rules and codes of conduct that may not be obvious at first glance. While breaking the rules or code of conduct of a group or community may not result in you being immediately banished or banned, it is much easier to be welcomed and accepted and avoid disagreements or other negative interactions with existing members when you know the right way to act – even before you post your first message!

As a professional who is seeking to build your online reputation as a subject matter expert, it is crucial that you limit yourself to online communities that are led by other professionals or experts in your field. If unprofessional or uncivil behavior is acceptable in a group or community, it would be best to move on and seek out another. Depending on the group or community, it may be acceptable to use your real name or you may be expected to use a pseudonym, but avoid communities where users use anonymity as a cover for acting inappropriately or attacking others. Finally, it would be best to seek out communities where expert opinions are sought by other users and established members aren’t continually challenged – it is important to remember that some online communities operate as virtual “fight clubs,” where disagreements, verbal sparring and even personal insults are encouraged, even among professionals in certain fields such as IT or personal technology! While there is nothing inherently wrong with arguing for the sake of arguing with others as a game, or as a way to blow off steam, trying to establish yourself as an expert in such a community can be a profound and ultimately fruitless exercise in frustration.

You may be asking yourself, how can I successfully find and join the right communities when so many rules and behaviors are essentially unwritten? The answer is to lurk, or to read and follow the messages of others without actively participating yourself. A common refrain from established users when a new member breaks a rule or commits some sort of faux pas is “lurk more,” and it is true that new users should lurk more before attempting to join a discussion or ask a question. How long should you lurk? It’s simply a matter of comfort and familiarity with a community – once you completely understand the rules and code of conduct of a community, you know most of the established members and you feel comfortable participating, then you may have lurked enough.

Be Helpful And Selfless

As a professional interested in building your online reputation, it’s not what a community can do for you, but what you can do for the community. Most online communities and groups exist as forums where users help each other, usually by sharing information and offering assistance when needed. Don’t overtly promote your business or organization, as other users often shun those who are blatantly using a community to market or advertise. Other users will expect you to prove yourself as an expert by sharing your knowledge, answering questions and even take a personal interest in helping other users on an ongoing basis, helping them through a complicated problem or project. By establishing yourself as a helpful user who others can turn to for assistance, you can quickly gain the friendship and trust of others while avoiding at least some of the conflicts that can sour the experience and damage your reputation.