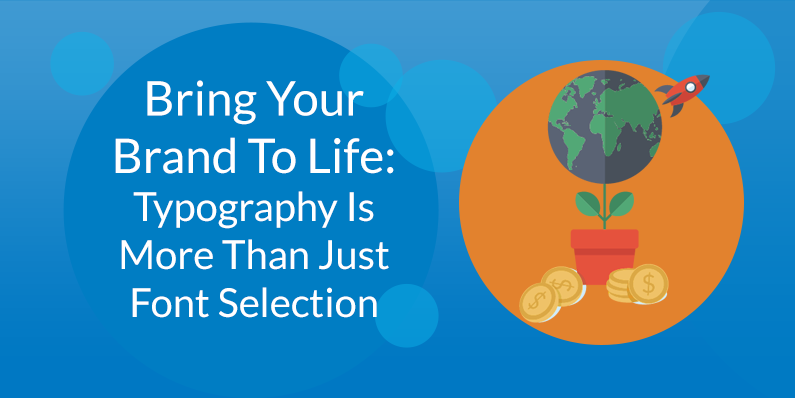 Like many of the elements of digital branding, typography can be deceptively simple. We know when typography works well, but to the untrained eye, we can’t often explain why it works. Typography can be defined as simply as the overall arrangement of type, but mastering typography can become a lifelong obsession, and the intricacies of typography are often debated among designers. Anyone with a simple word processing program can apply typography to a document in a matter of minutes, but a professional typographer can spend hundreds of hours choosing just the right font and arrangement of type for a product. When Apple recently decided to utilize a fresh font for the newest MacBook keyboard, designers took notice, but most designers and typographers believe that “good typography is never noticed.”

Typography is a vital element of design, and it’s important to ensure that it is applied correctly to your branding, web properties and marketing materials. As a business owner or manager, you don’t have to become an obsessive typographical expert, but it is important to understand the basics of typography so you can effectively communicate with your designer. Not only will you want to convey exactly what you want to achieve with typography in the earliest stages of the project, but you’ll also want to convey exactly why you may be unhappy or uncomfortable with the typographical layout once it has been submitted to you for approval.

It’s Much More Than Just Fonts

Most people have limited experience with typography, and that experience usually consists of choosing a font and manipulating its size and various accentuation tools such as bold and italic. Some word processor users also manipulate the layout of the text as well, although most don’t often have a clear understanding of what it is they’re actually doing to the text, aside from manipulating the typography until they are satisfied with the results. However, there are many different and often complex ways to arrange type, and through the careful and deliberate application of typography, a designer can influence the mood of the reader and the pace of reading.

Leading (also referred to as line-height) refers to the amount of vertical space in-between lines of text (i.e. single-spaced, double-spaced). When leading is sufficiently decreased and there is less space in-between lines of text, users can be motivated to read more quickly and can begin to feel anxious or claustrophobic. When leading is sufficiently increased and there is more space in-between lines of text, users usually read more slowly and feel more relaxed and open. However, if leading is decreased or increased too much, the text can become difficult to read and comprehend. Many of the same principles apply to tracking, which refers to the space between words or groups of characters, and kerning, which refers to the space between the individual characters of any given word. Making small, subtle changes to the various spaces in and around characters can sometimes result in excellent design, but going too far in any direction can ruin both the readability and overall design of the project.

The amount of control that a typographer or designer has over the typography in a digital product can vary greatly, depending on the format of the product. For instance, designers can exercise exact, minute control over the typography in a logo, or a digital document such as a Photoshop or EPS file. Websites are different in that many factors can influence how text is displayed to an end user – a typographical layout can be altered simply based on the hardware the website visitor is using and the settings of the web browser, including the way the web browser is set to display fonts. Understanding the limitations of the platform in question can help prevent headaches and disagreements later on for both you and your designer.