Videos, Copyrighted Material and Fair Use 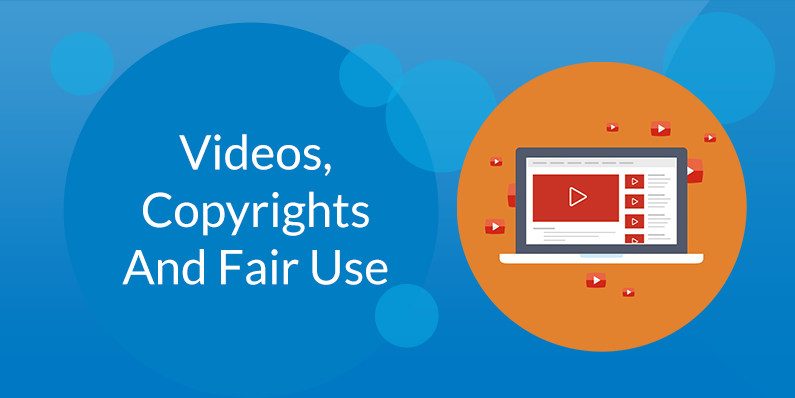 Creating video for your blog posts and website can be a great addition to an otherwise bland and uninspiring blog or social media feed. However, many amateur video producers, including business professionals who are creating videos for the first time, often include unauthorized copyrighted material in their videos, which can result in serious and significant legal repercussions after a video has been published. Not all copyrighted material is strictly off limits in every context, so how do you know what you can and cannot include in your videos?

Copyright In The United States

Copyright law in the United States can be technically complex, but the basic concepts and rules are fairly simple and straightforward: If you produce certain types of creative works, and you aren’t under contract to produce work for a third-party, you own the copyright on the work you’ve published or registered for the duration of your life and 70 years after. Registration is not necessary to enforce the majority of rights under copyright law, but most professionals and IP owners choose to register copyrights. The basics of copyright protection include restrictions on the reproduction and distribution of works and the ability to perform, display or create derivative works based on the copyrighted material.

The most common forms of copyright infringement that amateur video producers commit include unauthorized inclusion and reproduction of copyrighted music and the inclusion of copyrighted video, which are usually clips of movies and television programs. If an amateur video producer is unfamiliar with copyright law, these violations can appear to be perfectly acceptable – after all, movies, television shows and even commercials often include popular music and clips of shows and movies. Yet almost every use of commercial music in a movie, television show or commercial involves a lengthy and expensive licensing process, while the use of movies and television show clips is either authorized by the copyright holder or falls under the doctrine of Fair Use.

The Doctrine Of Fair Use

The restrictions of copyright law are not absolute – in fact, it is perfectly legal and acceptable to use copyrighted material in a strictly limited fashion under a doctrine known as Fair Use. The basics of Fair Use state that short segments of copyrighted material can be used and reproduced without the authorization of the copyright holder for three general reasons – (1) to comment and/or criticize the work in question, (2) to parody the work in question, or (3) to “advance understanding of environmental, political, human rights, economic, democracy, scientific, and social justice issues, etc.” (From Title 17 of the United States Code).

How Fair Use Works

If you are producing a video critical of the physical violence in movies, and you were to include a short clip of a violent scene from a copyrighted movie as evidence of your assertions, your use of that clip would most likely fall under the Fair Use doctrine. Also, if you were to produce a comedy skit or cartoon strip that parodies the characters and plot of a copyrighted work, that would also most likely fall under the Fair Use doctrine. However, posting a lengthy clip of a movie or song or an entire movie or song to a platform like YouTube, or even just playing a copyrighted song in the background of your video, would not count as Fair Use, even if you attached comments to the clip that were critical of the content or mocked the movie or song in question.

Unfortunately, some parties promote the legal protections afforded by the Fair Use doctrine beyond its legally-defined and accepted limits, or believe that a copyright violation will be automatically excused if a Fair Use notice or declaration is prominently attached to the work in question. Also, some video producers believe that if other videos are available on YouTube or another platform that include unauthorized copyrighted material, it must be acceptable to do the same. At some point, if your infringing video is easily findable through the Internet, you will most likely receive a legal notice from a copyright holder, regardless of the policies of the platform hosting the video, and if they believe you have directly profited from the use of their work, they have the option to pursue civil action against you that can be financially devastating to you or your business.

If you firmly believe that your use of a copyrighted work falls under the Fair Use doctrine, it is still advisable to learn as much as you can about Fair Use and how it applies to your situation. If you receive a formal notice asking you to remove copyrighted material from the Internet, commonly known as a Digital Millennium Copyright Act (DMCA) notice and take down, it is advisable to immediately remove the video in question and seek the advice of an attorney before republishing it or any other similar videos. Even if you firmly believe that you are in the right under Fair Use, civil litigation can be a prohibitively-expensive and time-consuming process, so wisely “picking your battles” may be the best course of action.

It is nearly impossible to legally include your favorite pop song or clips from your favorite movies in your videos. However, that doesn’t mean that you can’t include music or other content to punctuate and liven up your production. Generic music is available to affordably license online, and it is often produced by studio musicians in the same general style as popular copyrighted works. Stock animations and footage is also available to affordably license online. If your budget is too limited to license even affordable stock material, resourceful video producers have been known to utilize music, sound effects and video footage in the public domain. Whenever you use anything from the public domain, be sure to verify and double check that the material in question is legitimately part of the public domain. Spending this extra time can help ensure that you will not be penalized for anything you produce.