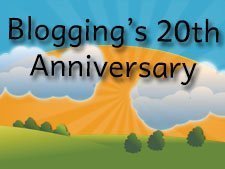 Blogging, or writing and maintaining a journal on the Internet, just celebrated its 20th anniversary, and we couldn’t think of a better time to reflect on the origins of blogging, the practical benefits that blogging provides for professionals, businesses and organizations, and the future of blogging – especially in the age of social media.

The Origins Of Blogging

The exact origins of blogging are a bit fuzzy, as blogging itself is not an entirely new concept – in fact, the origins of blogging are ancient. Since humans began developing written languages thousands of years ago, millions of people have kept personal journals and diaries. Blogging is simply maintaining and publishing a digital journal or “online diary,” as the earliest blogs were called. In late 1994, two men – Justin Hall and Dave Winer – are credited with creating and maintaining the earliest blogs, and Winer is also credited with creating and developing early blogging software, RSS, and podcasting.

It is important to note that the mass popularity and widespread adoption of blogging did not begin until blogging tools, or software applications and services that facilitate and promote blogging, were developed. The earliest bloggers had to publish updates either by writing HTML markup or using website development tools designed to create static websites, which made the process onerous and time-consuming. It was also difficult to notify others when a blog was updated, as early search engines and internet directories were mainly designed to catalog static sites. With the help of blogging tools created by Winer and others, the mostly static World Wide Web, known as “Web 1.0”, later gave way to “Web 2.0”, which heralded a new wave of websites and web services dedicated to self-publishing, online communities and resulted in a flood of user-created content that continues to this day.

In 2003, Matt Mullenweg and Mike Little released WordPress, a new blogging tool and Content Management System (CMS) that was a software “fork” of another blogging platform called b2/cafelog. From the beginning, both Mullenweg and Little wanted to develop a platform that was both free and open to all, and their software is now used by over 60 million websites! Blue Zenith is proud to use and promote WordPress as our primary CMS and blogging platform!

The Benefits Of Blogging

It is difficult to overestimate the benefits that blogging has brought to individuals, businesses and organizations, especially independent writers and small businesses. In the twenty years since Dave Winer published his first blog post, blogging has greatly contributed to the democratizing and subsequent mass adoption of online writing and publishing, essentially allowing anyone, including individuals with little to no technical knowledge or experience, to begin writing, promoting and often monetizing their work online. It has allowed writers and readers to connect in ways previously thought unimaginable and it has fostered the development of online communities and groups that promote and share new written works almost instantaneously. And finally, the current popular wave of social media services has borrowed greatly from blogging, with social “walls” and “timelines” that act as a newer, more abbreviated forms of online self-publishing.

Social media has become so popular and ubiquitous online that some question whether professionals, businesses and organizations should still devote time and resources to maintaining a blog. One of the primary differences between social media and blogging are the fundamental nature of the platforms – a blogger, through the use of a blogging platform, has control over the platform itself, while social media users are contributing content as a user of a platform and service largely outside of their control. While this may not seem like an important distinction to some, especially to personal or casual users who have no interest in creating or maintaining their own publishing platforms, it is a vital distinction for professional users that want to have complete ownership and control over content, especially content that is monetized either through advertising or online marketing, including the careful implementation of Calls To Action that funnel and convert readers into paying customers. To many online marketers, blogging and social media aren’t competing platforms; instead, they are two crucial components of an overall online presence that should be used to compliment and promote an individual, business or organization’s primary website.

As the Internet and World Wide Web continue to grow and develop through a wider adoption of cheaper and more accessible Internet-connected mobile devices and a new outreach to populations throughout the globe, blogging will continue to play an important role in both the creation and dissemination of written works and the democratization of mass communication, publishing, and marketing.