Do You Need a Mobile App? 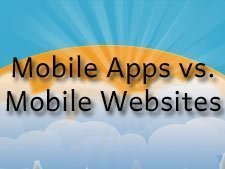 It is absolutely necessary to have an online property dedicated to mobile – if your business doesn’t have a website or mobile apps that allow your customers and followers to connect through a mobile device, you’re needlessly limiting your outreach and potential. There are three ways your business can connect with mobile users – you can create mobile apps, create a dedicated mobile website, or utilize responsive web design. In this blog post, we will explore mobile applications in-depth and discuss the pros and cons of releasing apps for your business.

The Brief History of Mobile Apps

However, one crucial design element of the iPhone – the omission of the Adobe Flash software platform due to performance issues – meant that many complex websites wouldn’t function properly when accessed with the iPhone’s mobile web browser, Safari. Because of this, many companies decided to create application versions of their websites and programs, which either met or exceeded the same level of functionality as the standard desktop counterparts. Suddenly more traditional mobile applications, such as office software, calculators and games, were joined by apps designed to empower mobile users and promote the brands and products of tech-savvy businesses.

Mobile apps, regardless of their complexity or intended purpose, are small, self-contained applications specifically built and released for a specific mobile platform. There are two main mobile platforms that share the vast majority of market share – Apple’s iOS, which is used by iPhones, iPads and iPod Touch devices, and Google’s Android OS, which is utilized by a wide variety of mobile devices manufactured throughout the world. There are three less-popular mobile platforms – Amazon’s Kindle Fire, Microsoft’s Windows Phone, and Blackberry OS – which share a small fraction of the total mobile throughout the world. For the majority of businesses and organizations as of 2014, it is accepted practice to at least release apps for iOS and Android, although this may change in the future.

The Advantages Of Releasing An App

Whether or not your business should release a mobile app largely depends on the time and resources you have available to dedicate to your digital properties. The main advantage of releasing a mobile app is the end-user experience – a mobile app allows you to create a mobile experience that is completely tailored to the user’s platform of choice. As long as the user has a mobile device that meets the minimum requirements of the current version of the OS and the app itself is mostly free of significant bugs, the experience of using the app will be exactly as the designers intended. In addition, an app allows a business to add advanced features that may not work properly with all mobile web browsers.

The Downside Of Mobile Apps

The main drawback of releasing a mobile app is the initial and ongoing costs associated with designing, coding, and maintaining apps for each platform. Mobile platforms do not remain static – new versions of mobile operating systems are continually released, and newer and more powerful mobile devices are continuously released to the market. Your mobile application will have to be continually updated to fix bugs and other errors, and periodically completely new versions will have to be designed and released to coincide with newer operating systems and devices. Apps that are released and then neglected gradually attract dissatisfied user reviews and complaints, which can do
damage to your online reputation and brand. On the other hand, mobile web sites are designed to adhere to web standards and other generally-accepted rules, which requires less time and resources to maintain over a longer period of time.