The User Experience: Beyond The Browser 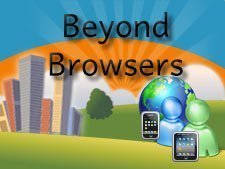 With the advent of Google Glass and “smartwatches”, it appears to be more likely that users will be using alternative devices to browse the web. How do you prepare? Start by relying on some older web technologies like RSS.

I’ve Heard Of Google Glass And Smartwatches, But What Exactly Do They Do?

Over the past few years, technology companies have made public plans to look beyond smartphones and tablets to new form factors for “smart” computer devices connected to the Internet. While Google has publicly begun beta testing “Google Glass”, a new “wearable computer”, Apple, Samsung and Google have also been connected to “smartwatch” products, which will also be wearable computers.

Not New To Web Designers

When the Web was first introduced, the vast majority of users connected through a personal computer and interacted with basic web pages using a keyboard and mouse. As web browsers advanced and new web framework technologies were introduced, web pages became more advanced. Then, with the introduction of the first mobile web browsers, suddenly it was “back to basics” – the first WAP browsers only displayed text, and if a website wanted to “go mobile”, it had to release a text-only WAP version.

As cell phones advanced into “smartphones”, WAP gave way to mobile HTML browsers and mobile devices such as BlackBerry phones and Windows Mobile devices could access full HTML web pages, although it wasn’t until the introduction of the iPhone and Android smartphones that mobile web browsing became dominant. Now, for the first time PC and laptop sales have begun to stagnate while tablet and smartphone sales – especially the Apple iPhone, iPad, and Samsung Galaxy products – have grown exponentially.

This rapid growth of smartphones and tablets have introduced the need for responsive web design, in which web sites “respond” to a range of screen sizes. In other words, when the browser window shrinks, so does the web page and all its content. But now that technology companies are starting to develop wearable computer products, how responsive will web pages have to be to stay usable to users? What if a device has a screen the size of a large postage stamp, or a “screen” that covers the user’s field of vision? Will screens even exist as we know them? Will web pages exist in a form that could accurately be described as a “page”?

This Is Overwhelming! Where Do I Begin?

While the pace of new personal technology is moving at a remarkably rapid pace, this future isn’t quite here – yet. The vast majority of your customers will still be using personal computers and smartphones to access your website for a long time to come. But what should you do now to begin preparing for customers who may access your webpage with a device other than a PC or smartphone?

The Future Is Old

Believe it or not, some methods to “future proof” your website and web content include embracing some older Internet and Web standards and technologies. Essentially, in order to accommodate these new, nontraditional devices, it may be necessary to move away from the idea that all of your web content should be optimized strictly for traditional, modern web browsers. This doesn’t mean that you should disregard your current, modern web page and Content Management System – it simply means that by making your content available outside of a modern website is the first step towards embracing these nontraditional devices.

An excellent way to alternatively deliver web content is through the use of a “feed”, either in the Really Simple Syndication (RSS) or Extensible Markup Language (XML) format. These formats were developed in the 1990s as a way to deliver content feeds to “readers”, or software applications that collect web content into a centralized collection. RSS and XML reader applications are still in use today, and these formats are also used to deliver audio and video content to applications such as iTunes and social media services. Now, apps for both Google Glass and the Pebble smartwatch utilize RSS to deliver content to users.

In addition to adding content feeds, a good way to embrace the usability on non-traditional Web devices is to design your website using traditional HTML and CSS structure and standards, including following guidelines provided by the World Wide Web Consortium (W3). When your website is built on a solid foundation of proper markup and web standards, it is easier for the developers of nontraditional devices to accurately locate and present your content to users. Internet users with disabilities who rely on specialty devices to access the Web already know that websites with proper HTML and CSS markup are easier to browse and users of new wearable computers may also rely on traditional markup to browse your website in new, nontraditional ways.