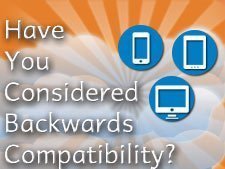 In our previous posts about mobile websites, we made references to smartphones, iPhones and Android devices. Smartphones have permeated our culture to such an extent that it is hard to believe that their popularity is a relatively-recent phenomenon.

A Look to the Past

The iPhone was first introduced in 2007 and the first Android phone was released a year later. Before these devices were released, there were other phones that could browse HTML web pages – most notably Blackberry devices, Windows Phone and Windows Pocket PC devices, to name a few – but the experience was often stunted and frustrating. Since the late 1990s, Many “feature” or basic phones have browsers that supported a simplified markup language called Wireless Application Protocol, or WAP. WAP sites are extremely basic – many only contain text and very small image files.

Should I Be Worried That Some Of My Customers Can’t View My Mobile Website With Their Phones?

Is It A Good Idea To Disregard Customers and Potential Customer Using Basic Feature Phones?

It’s important to remember that many consumers who choose feature phones over smartphones have no interest in accessing the Web with a phone. It is possible they cannot afford the additional data charges that often come with smartphone plans, or choose not to pay more than they have to for services they don’t use. Some may choose to use a mobile “hotspot” with a laptop or tablet while using a feature phone for phone calls and texts. Others may be concerned about personal privacy issues surrounding mobile phone usage. No matter the reason, a sizable percentage of customers and potential customers exist who may not utilize your current mobile website – or any mobile websites, for that matter – with their mobile device.

Is it important to develop a WAP website to cater to customers who use their feature phones to access the Web?

It may not be technically difficult to add a basic WAP page to your web server, but its usefulness will be limited to basic, static content. In addition, if your CMS does not have the capability to produce a WAP-compliant page, it will have to be manually written, tested and formatted. If your website is powered by WordPress, there are plugins available that will produce mobile content that is correctly formatted for WAP browsers. Nevertheless, adding a WAP page to your site could potentially help to bring in more customers, just by allowing your site to be even more versatile.